A few months back I posted a design for an experiment on my blog. The goal of the experiment was to find out whether it would be possible to use a microblogging tool to narrate our work with the intention of making better performing virtual teams.

Over the last two months, the direct team that I work in (consisting of 18 people) basically participated in the experiment in the way that it was designed: They posted constant, daily or weekly updates on our Yammer network. Each update would describe things like what they had done, who they had spoken to or what issues they had encountered. Occasionally the updates were peppered with personal notes about things had happened or were going to happen after work.

Methodology of the experiment

There was no formal (or academic) research methodology for this working experiment. I decided to use a well-considered survey to get people’s thoughts at the end of it. Out of the 18 team members 17 decided to fill it in (in the rest of the post you can assume that n=17). The one person that didn’t, has taken up another role. This means there is zero bias in who answered and didn’t answer the survey.

I find it more interesting to zoom out and look at the methodology of this experiment as a whole. To me doing things like this is a very good approach to change in the workplace: a grassroots shared experiment with commitment from everybody working towards solutions for complex situations. This is something that I will definitely replicate in the future.

Didn’t this take a lot of time?

One concern that people had about the experiment was whether it would take a lot of time to write these updates and read what others have written. I’ve asked everybody how much time on average they spent writing status updates and reading the updates of others. This turned out to be a little bit less than 5 minutes a day for writing the posts and slightly over 5 minutes a day for reading them. The standard deviations where around 4.5 for both of these things, so there was quite a big spread. All in all it seems that narrating their work is something that most people can comfortably do in the margins of their day.

Barriers to narrating your work

Designing the experiment I imagined three barriers to narrating your work that people might stumble over and I tried to mitigate these barriers:

The qualitative answers did not identify any other limiting factors.

Connectedness and ambient team awareness as the key values

Looking at all the answers in the questionnaire you can clearly see that the experiment has helped in giving people an understanding of what other people in their team are doing and has widened people’s perspectives:

I enjoyed it! I learned so much more about what my colleagues are doing than I would have during a webcast or team meeting. It helped me understand the day-to-day challenges and accomplishments within our team.

The experiment was very valuable as it has proven that [narrating your work] contributes to a better understanding of how we work and what we are doing as a team.

People definitely feel more connected to the rest of their team:

There was practical and social value in the posts:

The value of "Narrating your work" is practical: the content is helpful and it is easy to ask questions/get replies

The value of "Narrating your work is intangible and social: it creates an ambient awareness of each other

A lot of people would recommend “Narrating your work” as a methodology to other virtual teams: 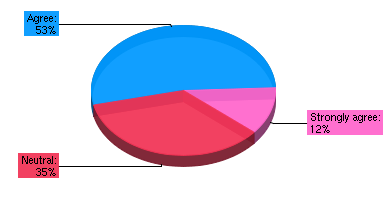 I asked what “Narrating your work” type of update was their favourite to read (thinking about content, length and timeliness). There was a clear preference for short messages (i.e. one paragraph). People also prefered messages to be as close as possible to when it happened (i.e. no message on Friday afternoon about what you did on the Monday). One final thing that was much appreciated was wittiness and a bit fun. We shouldn’t be afraid to put things in our messages that reveal a bit of our personality. Sharing excitement or disappointment humanizes us and that can be important in virtual teams (especially in large corporations).

Personally I liked this well-thought out response to the question:

The best posts were more than simply summing up what one did or accomplished; good narrations also showed some of the lines of thinking of the narrator, or issues that he/she encountered. This often drew helpful responses from others on Yammer, and this is where some some additional value (besides connectedness) lies.

It made me realize that another value of the narrations is that they can lead to good discussions or to unexpected connections to other people in the company. This brings us to the next question:

The posts in the private group were only visible to the 18 participants in the experiment. Sometimes these posts could be very valuable to people outside of the team. One of the key things that makes microblogging interesting is the asymmetry (I can follow you, but you don’t have to follow me). This means that posts can be read by people you don’t know, who get value out of it beyond what you could have imagined when posting. What to you might sound like a boring depiction of your morning, might give some stakeholders good insight in what you are doing.

So on the one hand it would be very beneficial to widen the audience of the posts, however it might inhibit people from writing slightly more sociable posts. We need to find a way to resolve this seeming paradox.

Based on the experiments results I would like to recommend the following way forward (for my team, but likely for any team):

I liked what one of the participants wrote:

I would like our team to continue as we have, but the important steps to take now are 1) ensuring that we stay in the habit of narrating regularly, 2) showing the value of what we achieved to other teams and team leads, and 3) ensure that there is enough support (best practises etc) for teams that decide to implement [narrating your work].

I have now taken this as far as I have the energy and the interest to take it to. I would really love for somebody to come along and make this into a replicable method for improving virtual teams. Any interns or students interested?

I have just finished writing a small proposal to the rest of my team. I thought it would be interesting to share here:

We work in a virtual team. Even though there aren’t many of us, we often have few ideas about what the other people in our team are working on, which people they have met recently and what they are struggling with. The time difference between our main offices make our occasional feelings of being disconnected worse.

This “Narrating Your Work” experiment is an attempt to help overcome these problems.

If you are interested in some background reading, you should probably start with Luis Suarez’ blog post about narrating your work (”it’s all about the easiest way of keeping up with, and nurturing, your working relationships by constantly improving your social capital skills”) and then follow his links to Dave Winer, ambient intimacy and declarative living.

“Narrating Your Work” should really be approached as an experiment. When it was first suggested, some people showed some hesitation or worries. We just don’t know whether and how it will work yet. The best way to find out is by trying. In Dutch: “niet geschoten, altijd mis”.

The experiment will have a clear-cut start and will last for two months. After running the experiment we will do a small survey to see what people thought of it: Did it deliver any benefits? If any to whom? Was it a lot of work to write updates? Did it create too much reading to do? Do we want to continue with narrating our work? Etc.

It needs to be clear who is participating in the experiment. If you decide to join, you commit to doing one of the following three things (you are allowed to switch between them and you will be “policed”):

The first option requires the most guts, whereas the last option requires the most diligence: it is not easy to take the time every week to look back at what happened over the last five working days. Are you the type of person who likes to clean the dishes as the day progresses, or are you the type who likes to leave them till there is nothing clean left? Choosing one of the first two options (rather than the third) will give the experiment the greatest chance of success.

Participation only requires the commitment for writing the updates. You are not expected to read all updates of the others, although you might very well be tempted!

How to do it: making it work

To make the work updates easily accessible we will use Yammer. You can do this in two ways:

When you are posting an update, please think about the people who might be reading it, so:

I am very interested in any comments you might have. Does anybody have any experience with this?