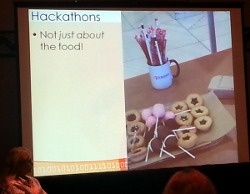 Not just about the food

Melodi Albert and Nancy McClary from Dominian Enterprises, a company with about 3400 employees, talked at Learning 2012 about how they used hackathons as a learning tool.

creating a set of technical protocols as a platform for innovation by content authors and aggregators. Applications built to harness the power of harvesting and analyzing the Learning Registry data will allow educators to quickly find content specific to their unique needs. The Learning Registry will store more than traditional descriptive data (metadata)–it will also allow sharing of ratings, comments, downloads, standards alignment, etc.

Initially the hackathons were organized as a recruitment effort, but they found out that they are great learning events too: people can break out of their normal walls, they can learn from eachother and they can actually do something. It was a challenge to sell to management that developers could take two days out of their schedule to work on this, so the first one was on a (rainy) weekend. After the success it became easier to get the time. Outside of the opportunity costs these events are very cheap to run (about $75 per person for the two days).

The first hackathon was just for their own employees. Later on they opened up to the rest of the world with the code hosted on Github. They fill them up on a first- come-first-serve basis with developers, business leaders, designers and marketeers. Each of these types get their own colour, so that they are recognizable and can come together as mixed teams. The teams build something of their own choice and they present it at the end of the two days. During the two days the people are well cared for with nice food and usually some swag (e.g. a T-shirt with a logo).

There is a lot of return on investment for these events. Melodi literally said: “There isn’t any amount of money we could have paid to get the same level of learning as these events delivered”.

I think this is an interesting model to play with. Can this work in domains that aren’t about programming? Could we do a “hackathon” for developing a learning experience? I want to find out (and will start by reading this Wired article on the topic)!