Today I keynoted the Dutch Moodlemoot (mootnl12). I talked about how current times force us to let go of curricula, why it is more important than anything else to teach students how to learn, what it means to work in a knowledge society (work becomes synonymous with learning) and what this might mean for a virtual learning environment like Moodle. Unfortunately this talk was in Dutch and so will be the accompanying blogpost.

Arjen Vrielink and I write a monthly series titled: Parallax. We both agree on a title for the post and on some other arbitrary restrictions to induce our creative process. For this post we agreed to write about DrupalJam 6 by commenting on 7 tweets that have a #drupaljam hashtag. You can read Arjen’s post with the same title here.

DrupalJam 6 was held in Amsterdam on March 19th 2010. I have never really used Drupal, but as a project it has many similarities to Moodle and that makes it interesting to me. Just like Moodle it was started by a single very sociable person with a vision, just like Moodle it is a PHP application and just like Moodle it is the de facto mindshare (if not market) leader in its field. All the similarities make looking at the differences even more interesting. Moodle has commercialised through a decentralised network of Moodle partners, whereas Drupal has chosen a venture capital backed route with Acquia.Martin Dougiamas has decided to commercialise the Moodle trademark through a decentralised network of Moodle partners, whereas Dries Buytaert has chosen a venture capital backed route by creating a company specialising in Drupal services: Acquia, allowing other companies to (often freely) license the Drupal trademark too. (Text deleted and added after a comment by Bert Boerland, thanks!) The DrupalJam was more product focused (in the sense of software focused) than your standard Moodlemoot. This makes sense: DrupalJam visitors only share the fact that they use Drupal (the contents of their site can be about anything) whereas Moodlemoot visitors usually also share a passion for education.

Let’s cut to the chase: During the DrupalJam I kept monitoring the #drupaljam hashtag using Tweetie 2. I then favourited every tweet that I thought was interesting and could be used for this post. Out of the twenty or so favourites I selected these 7 to share with you.

1. tkeppens: Het zou fantastisch zijn de #drupaljam sessies na de conf als screencast te kunnen zien. Drukke agenda laat niet toe er te zijn. : – ( #drupal
A quick translation: “It would be fantastic if #drupaljam sessions would be viewable as a screencast after the conf. Busy agenda doesn’t permit me to attend”. Technology is now at a stage where even for a non-commercial event, this should be feasible. Presentation capturing is something that I have been exploring in my role as Innovation Manager for Learning Technologies recently and it is a market with fast maturing products. I have looked at Presentations 2Go and am also very interested in Echo 360‘s offering (see here for a more complete list of options I explored). I believe it is good practice to separate the video of the speaker from the video of the speaker’s laptop. Does anybody know what is the easiest way of organising this on the cheap for conferences like the DrupalJam or a Moodlemoot? 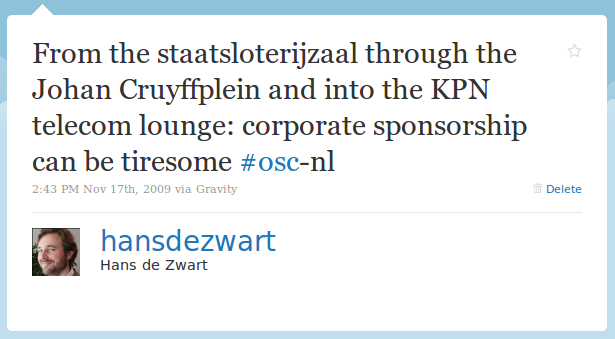 However the fact that it is Microsoft sponsoring an open source event is pretty new to me and apparently something we should be getting used to.

3. ijansch: #drupaljam dangerous question in opening. ‘how many women are here’ is so eighties… Make them feel normal, not special.
Women in technology is a pretty contentious topic. Ada Lovelace day has just passed and could be seen as a symptom of more ground needing to be covered. DrupalJam did not have a lot of women attending. As nooble wrote: Op #drupaljam met 2^8 mannen en 2^2 vrouwen (“At #drupaljam with 2^8 men and 2^2 women”). I agree with ijansch that the organiser did a terrible job in the way that they brought this to the attention of the complete audience. Instead they should have asked themselves why this is the case and how it can be changed for the next event. I’ve recently listened to two podcasts that discuss women in technology as a (sub)topic: FreeBDSgirl and Fernanda Weiden both on Floss Weekly. Another interesting project to stay in touch with is Women & Mozilla. Open source projects should never forget that there are also many other diversity and inclusiveness lenses to take into account outside of gender.

4. ijansch: Would be nice if #drupaljam was on http://joind.in for talk ratings
It is always nice to learn about a new web service through a tweet. I checked out Joind.in and have decided to register for an account and try and use it at the next conference I am organising (Moodlemoot on May 26th). Joind.in allows you to add tracks and talks to your event and then provide an easy link to a summary, slides on Slideshare and a way to score and comment on the talk. They have an iPhone app and an open API (so other apps should be on their way). The only thing that might be a problem is that it doesn’t seem to allow for localisation: the whole site is in English, making Dutch summaries stand out a bit.

5. ekes: apache solr stats #drupal understand what people look for on your site. Genius. @robertDouglass #drupaljam
The first tweet that has any relation to Drupal. Apache Solr is an interesting Apache project that sits on top of the Lucene search engine library. It is a very fully featured and fast search platform with things like faceted search out of the box. There is a Drupal project that integrates Solr with Drupal, bringing very rich search functionality to any Drupal website. Good stuff!

6. askibinski: Just learned about the ‘Levensthein distance’. A way to compare similarities between strings. #drupaljam
This tweet had me whipping out my phone to do a Wikipedia search (I use the excellent and free Wikipanion app for that) on Levensthein distance. It is a way to see how similar two strings of text are measured by their edit distance: how many steps do you need to transform one string into another. I have no idea why this concept came up during DrupalJam (I wasn’t at the talk), but I do now have another trivia under my belt.

7. bramveen: Maybe the speaker should remove his chewing gum #drupaljam
Every open source project seems to have a least one “rock star” and Morten Heide self-named “King of Denmark” was the rock star of the day. Morten loves umlauts, the name of his company is “geek Röyale“, and his two favourite words are “awesöme” and “shit”.

Morten is a web designer and was giving the final talk of the day, speaking about the new way of doing themes in the as yet unreleased Drupal 7. The only problem with the talk was that Morten was chewing gum while talking. That and the rest of his behaviour turned the talk into more of a show about Morten then a talk about Drupal theming. Afterwards Mortendk showed some remorse on Twitter: #drupaljam next time im gonna drop The gum it was an #epicfail hope ppl got The awesome shit in drupal 7 anyways. I would say: Keep the gum, the world needs more completely self-involved rock stars… 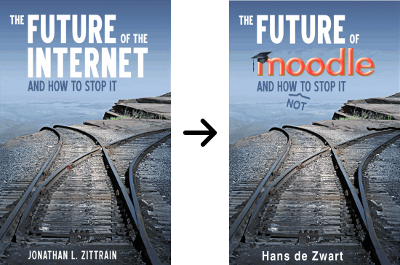