This is fourth year in a row that I am attending the Online Educa in Berlin. Yesterday, my colleague Willem Mander and I facilitated a session in which we used a scenario thinking methodology to think about the future of corporate learning. We’ve created a small website to show the result and will use this website to continue to refine the scenarios that came out of the session. The website is: learningscenarios.org, so head over there if you are interested to see more about this.

The opening plenary was opened by Talal Abu-Ghazaleh, the President of the Talal Abu-Ghazaleh School of Business in Jordan. He made the same joke as last year (a Churchill quote: “one of the greatest lessons that I’ve ever learned is that idiots are sometimes right” ). He came up with a couple of provoking points: he considers “developed” and “developing” offensive words which we should stop using. He think our talk about a “global crisis” is incorrect, there is a “Western crisis”. The word “spring” in “Arab spring” was sprung upon the Arabic world and is a concept that isn’t used in their literature, he says we should consider it a renaissance instead.

Next up was Neelie Kroes, Vice President of the European Commission and European Digital Agenda Commissioner. I’ve complained before that I am fed up with seeing her face on some big screen delivering a recorded message. To my great surprise she was actually present at the conference.

She discussed how she is on a learning curve herself, because when she became commissioner, she inherited the digital agenda, which was relatively new for her. She has now understood that sharing is the best way to compete: that was counterintuitive to what she learned before. According to her, we should realise how incredibly fast we are changing: the digital economy is only about 20 years old, the iPad only two. People now expect access to information anywhere, anyplace and anytime. At the same time she is disappointed in how the digital revolution is being used in education. We have not changed education enough. Her goal is “Every European Digital”, that includes teaching and learning (also as part of lifelong learning). We should not be constrained by how things were done in the past, rather we should be creative.

Three key ingredients are necessary to do this:

Changing learning through technology might not be an overnight process, but it will be revolutionary. We are moving in the right direction, but we do need to speed up. 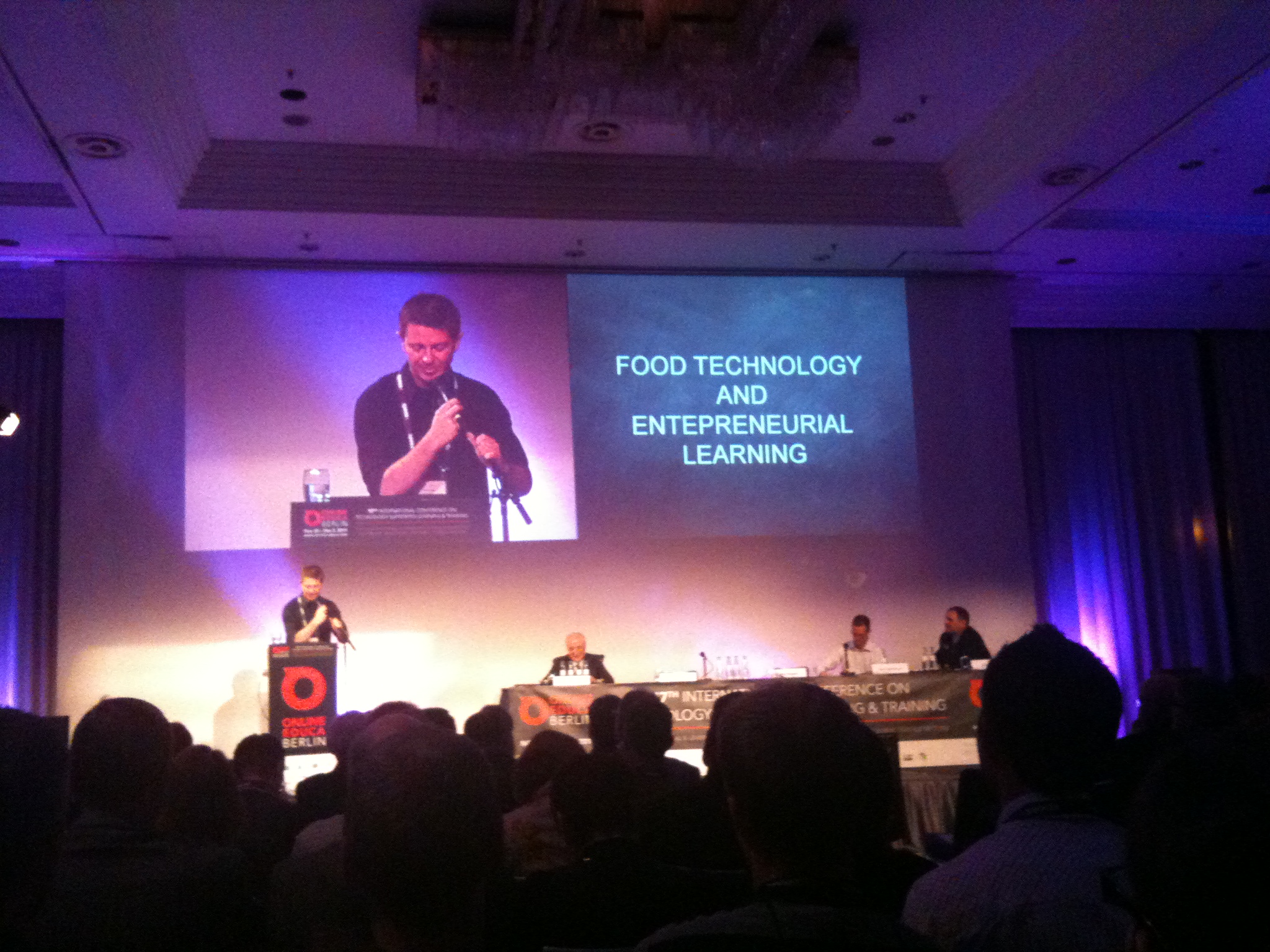 Peter Nowak, is a technology commentator from Canada. He is the author of Sex, Bombs & Burgers. His talk was titled “Food Technology and the Rise of Entrepreneurial Education”. His focus is on the effect of technology on people and society. According to him the dark side of human nature, gluttony, wrath and lust, and the industries that have sprung up around it have driven much of technological development.

Instinctively we think that food and technology is bad, whereas food and nature is good. This is not true, we are dependent on food technology to feed ourselves. Food technology is one of the biggest drivers of technological change. Half of the G8 nations are on the top eight list of biggest food producers in the world (the Netherlands is number four on that list). He then touched upon the green revolution which enable countries to become food exporters (he did also mention the criticism of that same green revolution: introducing corporate farming for profit and creating dependence on chemical fertilizers).

We are currently in an unprecedented period of poverty reduction. We have reached our millemium goals around poverty. 500 million have escaped abject poverty in the year 2005 to 2010. According to Edward Prescott, Nobel Prize winning economist, “the whole world is going to be rich by the end of this century”. Nowak believes that a massive decrease is poverty, will lead to many new jobs, which will massively increade education demand. Is this educational world ready for this onslaught of demand? One problem is the lack of teachers globally. We will need 8 million new teachers to maintain current teacher-student ratios. Demand will likely outstrip supply. We will need to accept entrepreneurial learning where both teacher and student are responsible for learning.

Nowak then references Mitra’s hole in the wall experiment, after which Mitra said: “I think we have stumbled across a self-organising system with learning as an emergent behaviour.” Learning is in our DNA, we just need to the opportunity and tools to help us. We used to have to learn the tools of the medium to express ourselves, but this is not longer the case. Amateurs can now use technology as quality is no longer necessary for self-expression.

His four points around changing education are:

John Bohannon is a journalist and visiting researcher at Harvard University in the US. His talk is titled: “Without Google and Wikipedia, I Am Stupid”. He really does want to argue this point. The Flynn effect is a well-known trend: IQ has been increasing steadily around the world. What is the reason for this? Are we really getting smarter?

He then talked about the Google effect and the research around it. We all now use the Internet for our “transactive memory”. When we are now asked a question, we immediately think of where can find the answer: Google, Yahoo, etc. Students are now far better at remembering where the information is stored, rather than the information itself!

Your Google footprint is the one-stop-shop from somebody’s identity. Single publications (e.g. a Guardian article) can have a disproportionate effect on somebody’s reputation. He did not offer any quick solutions to this problem, I think he just wanted to raise awareness around these issues.

Next up was Jeff Borden, Senior Director of Teaching and Learning (chief academic) at Pearson, the platinum (closed source) sponsor of the Online Educa. This was a sponsored talk, titled “Always learning: What Educators Want and What Education Needs”. Pearson/Fronter have learned from mistakes in the past when everybody disliked Larsen’s talk (there even was a slide with Moodle and Sakai) and now send true evangelists to come and present. There was so much evangelism for technology in education that I occasionally felt like was in a 15 minute Tell-Sell commercial.

He had some great examples of using learning analytics to find out why student succeed or fail. An average passing student spends two times more time in the first 10 days of a course, then the average student who will fail. This can be used for successful predictions about which students will make it. The next step is to use this type of data for personalising the experience of the learner. We can use the social graphs of courses to then make intervention in this area to create better outcomes for students. Basically a data mining approach to help fix education. This is an obvious reference to the #bigdata scenario in our #lrnscen scenario exercise.

Borden “Technology is a powerful enabler for changing education.”

While semi-liveblogging there is little time for reflection. One thing I noticed is that only two of the five speakers used slides to support their talk. I actually believe this is a lost opportunity there. It isn’t strictly necessary to use them, but it does often help. Overall I thought the talks were rather weak. Most of it wasn’t very groundbreaking and even a bit obvious. Exception to this was John Bohannon. The part of his talk about transactive memory was new to me and is, I think, at the core of why formal learning feels so outdated: it does not take this into account at all. His Google searches for his fellow speakers were both painful and funny. He used it to show how messiness of Wikipedia: on the one hand it is incredibly useful, but at the same leaves very much to want for.