Today was the second day of the 2012 PICNIC festival in Amsterdam. My notes about the first day are available here. Below my notes and thoughts on day 2:

Doc Searls – How the Old Bottom is the New Top

Searls spoke at at SxSW earlier this year. I caught him there already and made some notes. His talk today was very similar and still relates to the new book he has written: The Intention Economy: When Customers Take Charge.

Hood is from AKQA a (marketing? branding? ad?) agency and sponsor of the festival that helps brands “improve business performance through innovation”. He talked about how in our current times it is incredibly necessary to try things and to make sure you learn from whatever it is that you try. According to Hood whenever you learn you can consider yourself to be successful. He quoted Wayne Gretzky who said: “You miss 100% of the shots you don’t take”. Having learned something you have to act on it and follow it through.

Finally he referenced an interesting Disney project around gesture recognition on normal surfaces (like a door knob):

Rupert Turnbull – An Inside Job: Tales from a Corporate Startup

Turnbull is the publisher of Wired UK. He talked about intrapeneurship (although I am not sure what he meant to say other than that we should cherish intrapeneurs). He beliefs we are all born with an entrepeneurial spirit, but that we don’t all use this spirit when we grow up. Turnbull is a good storyteller and shared his own forays into the world of starting businesses. He also discussed how disruption can be an opportunity: Wired UK has an incredibly diverse sets of business outlets: website, magazine (print and tablet), podcast, consulting, events, hospitality, retail, etc.

Louisa Heinrich – I am Superman

Heinrich works for Fjord and has no slides (brave!). She talked about how the extended Quantified Self movement and its thinking can make us better human beings. Our lives are made of thousands of decisions every day without us even being conscious about many of those decisions. Our brains process massive amounts of data and it is an illusion to think that computers can just take over that task.

We are inherently narrative creatures. We think of our own lives as a set of very rich stories and we cannot help but see patterns in these stories. She loves the ideas of technology helping us creating stories about ourselves on the basis of the data that is in our lives. When this happens we should all have the power to decide who gets to look at our data though.

I’ve put some thought into the quantified self and how this relates to learning myself. There is a summary of a talk I did on that topic in Dutch or in English.

Ashcroft is from Motherlode and directed Four Horsemen, a film about the fundamental flaws in our economic system:

His talk was also mainly about storytelling. He showed the Hollywood formula: 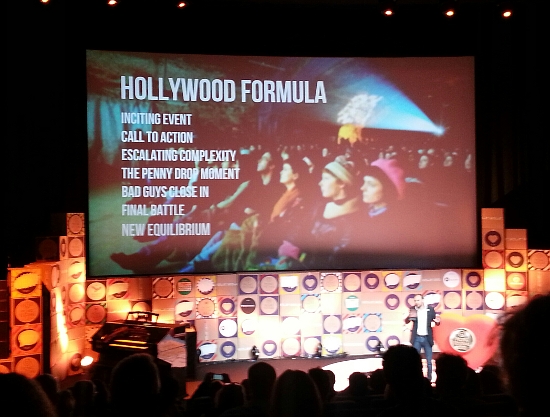 On the basis of these plot elements Ashcroft told a story about a new way of doing business and “new ownership” (the theme of PICNIC). Similarly to the talks of Turnbull and Hood this seemed to be more about how you say something than what you say. I’m left with barely any content… Yes, the world is changing. Now what?

Elizabeth Stark – The Democratization of Knowledge and Innovation

Stark talked about the largest online protest in history: against SOPA. She described how the media portrayed the demonstrations as a top down approach from a set of Silicon Valley executives, whereas in reality it very much was a bottom-up, decentralized and chaotic movement. Stark sees this as a way of working and innovating in the future: harnessing the creativity of millions of people who realise that you can learn anything you want, that experts are made (rather than born) and you don’t need a PhD to innovate.

Tabarki (a trendwatcher with his own company Studio Zeitgeist) started his talk by looking back at the rise of Lady Gaga who rose to the position of most influential woman in media in only two to three years. She was able to do this because of three things:

We are all little Lady Gagas: we are also liberated from the constraints of the past and we live in the age of digital decentralization. The next part of his talk focused on education (the usual Coursera-like examples). These new ways of doing education are based on the fact that one size no longer fits all. Other fundamental changes are related to sharing, transparency (check out this Norwegian website showing the income of all Norwegians for an example of true radical transparency). Finally, we will also have a much more hybrid approach to things.

How will we go from the old centralized system to the new system? Will it be a revolution or a transformation? One thing is for sure: we need take some risks.

Garvey is a biohacker and an academic (his slides actualy have content, unique in PICNIC): 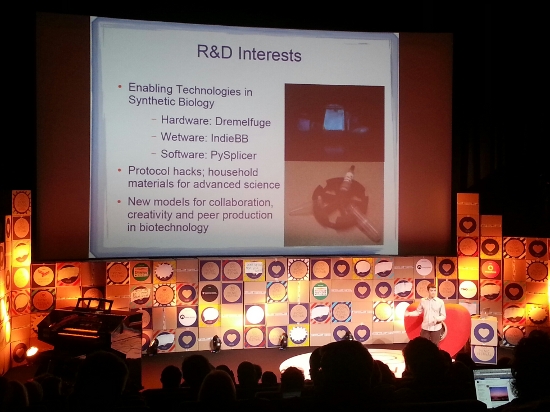 His wish is for this “most fundamental technology of them all” to be democratized. Garvey showed quotes from Bill Gates and Freeman Dyson saying how important biotechnology will be in the future (“the machine language of life”). Biotechnology as the original open source technology, it is there for anyone to hack on.

He talked about open access, PLoS and the concept of Research Blogging. He showed us something I hadn’t heard about before: sciencecommons.org (an open source Material Transfer Agreement).

Why biohacking? Basically because it is about the ownership of self. 20% of the Human genome is currently patented (WTF?!). So there is a rich community of hackers (in hackspaces and dedicated biolabs) and biopunkers using things like the OpenPCR (for thermocycling) trying to democratize access to this type of technology and genetic information.

Jon Lombardo – HealthyShare: Because Friends are Good for Your Health

Lombardo leads social media for GE and talked about their new app: HealthyShare, a way to let your friends help you with your health challenges. GE sees health as a social thing. There are four things you do to or with others when it comes to health:

The app transfers these pre-existing things to the online domain (unfortunaty this is another app that is heavily based on Facebook). Right now the app is mainly focused on what he calls “casual health”. They want to move it to the more serious health concerns.

Tim O’Reilly – The Clothesline Paradox and the Sharing Economy

I saw O’Reilly being interviewed on the same topic at SxSW and wrote a blogpost about it. His truly excellent talk today (refreshingly full of content compared to the morning) was mainly a rehashing of what was discussed there.

Make sure to also read his first principles titled Work on Stuff that Matters and his article Trading for their own account.

O’Reilly has published a case study documenting the economic impact of open source on small business.

Clash of Systems: A Socratic Conversation

Humberto Schwab, the “innovation philosopher for business” who used to be my philosophy teacher at the Montessori Lyceum and was called Huib then, led a Socratic conversation with a few of the speakers of the day.

Schwab started by outlining the basic rules for the Socratic method (as one way of battling the intellectual fallacy and putting the practical knowledge and practical intelligence in the center of our acting):

He then asked the four speakers to come up with one philosophic question each. The speakers asked the following questions:

I focused more on the methodology than on the contents of the discussion, very interesting!

Cardboarders is “a blog about artists, engineers, architects and people with a fetish for cardboard.” They created a giant cardboard marble run in the main hall of the Eye: 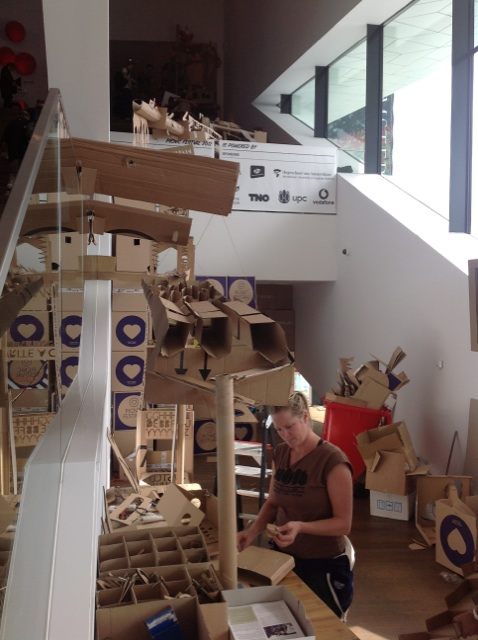 A random startup founder: “Sales are great! We just closed our second round of financing for 25 million dollars”

Every business has two markets:

During the tech boom number 2 was more important than 1. According to Searls we are in a tech boom now. The conceit of big data today is that the system understands better what you want than you do yourself. Searls deconstructed the concept of the loyalty card which started as a concept in the early nineties:

His main point: they don’t work are a bad idea and are just a retail fad. Read more here

Avoiding customers and treating them like cattle or worse. It is now standard practice to talk about “acquiring,” “capturing,” “locking in,” “owning” and “managing” customers. On the net we use the client/server metaphor a lot (that was chosen because slave/master didn’t sound good). The cookie is the main tool for the server to keep track what is happening with the client. Searls tells us how Phil Windley writes up the history of ecommerce:

The one right thing

Loving your customers and letting them leave. He uses Trader Joes as a an example:

Project VRM started in 1996. Its goal is to provide tools that make customers independent of vendors and better able to engage with vendors. Basically to create instruments of personal intentions. With VRM the customer drives. A couple of examples:

Free customers will always create more value than captive ones. His new book The Intention Economy will be out in May 2012 and more information will soon be available on the Customer Commons website.