Not too ago I participated in a course on how to drive a forklift truck. Part of the course was a classroom session in which the facilitator seemed to enjoy nothing more than telling anecdotes about terrible forklift accidents. Those anecdotes left a deep impression on me and they have made me much more careful whenever I am driving a forklift truck. However they also paralysed my partner (who owns the business that uses the forklift), making her completely nervous when she has to drive it.

I was reminded of this course when I chanced upon the following safety video:

(actually the video that I saw had even more gore, but has now been removed)

In the Netherlands we have had a campaign for years that warns people not to be careless when dealing with fireworks. The slogan is “Je bent een rund als je met vuurwerk stunt” (meaning something like: “You are an idiot when you play around with fireworks”). The initial campaigns were very shocking with posters and videos of damaged limbs. I couldn’t find any of the original materials, but did find this photo from a news article: 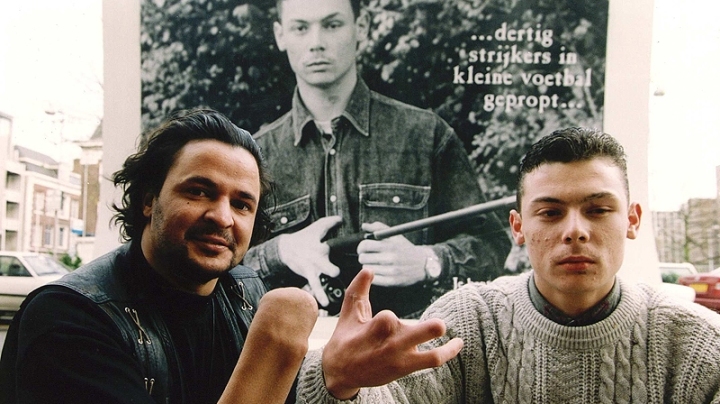 Slogan on the poster in the background: "...Stuffed 30 firecrackers in a football..."

The campaign has now lost its shocking edge and tries to make its point by alluding to what can happen to your virility when you have an accident:

Talking about virility is now an oft-used trick in trying to stop people from doing things. It is used in this UK anti-smoking ad for example: 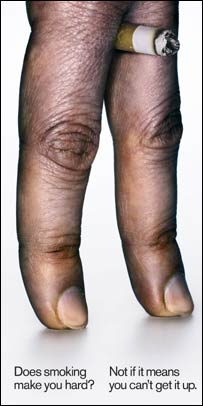 Does smoking make you hard?

These last two campaigns are obviously geared towards men (so was the forklift course by the way: the facilitator could not stop making offensive sexist jokes) and I wouldn’t be surprised if men in general need a different campaign than women when they need to be scared into (not) doing something.

I would be very interested to hear about any research that has been done into teaching about safety. It would be great if people have tried to answer questions like:

Does anybody have some pointers or opinions? 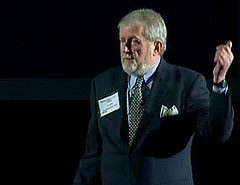 Language is still our prime tool for learning. I find language a fascinating subject and noticed a couple of things about language during the Online Educa.

First, Jay Cross. He was a panelist during the Battle of the Bloggers session. One topic they discussed was the financial crisis and how it could affect our profession. Jay said that if you are currently a Director of Training it would probably be smart to change your job title to something like Director of Sales Readiness (“we can’t let the director of sales readiness go…”). I think he is right. Language changes perception and a change in how you call something can significantly alter people’s behaviour. This is also the reason why I don’t like to use the Dutch word “allochtoon“: I think it has an unnecessary connotation of exclusiveness and us versus them.

Jay was very insightful about the other topics too, so I decided to go to the front desk an buy his book Informal Learning: Rediscovering the Natural Pathways That Inspire Innovation and Performance. I like how he consciously has put “performance” in the title of his book. That way he instantly disarms any suggestion that informal learning is just a pet topic for educational scientists. Instead, it directly addresses the issue that is central in the corporate world: “executives don’t want learning; they want execution. They want the job done. They want performance.”

The ability to adapt your language to the language of the client is one of the skills that any good consultant should have. Ton Zijlstra had an interesting take on this. We met at an Edublog dinner and one of the things we talked about was how he uses del.icio.us to find people who bookmark the same sites as he does, but who do this using different tags. If they use different tags for the same concepts it means they are in a different community or network. That is interesting, because they could be starting point for a whole set of new connections.

Properly designed software shouldn’t need any instructions let alone require a training on how to use it. Designing software properly is actually a hard problem. We are getting better at it slowly.

Nintendo is the leader of the pack when it comes to designing software in such a way that it needs no instructions. I have had a Nintendo DS for a couple of months and am amazed at how excellent some of the Nintendo titles are. I consider a game like WarioWare: Touched! to be a work of art. The amount of creativity and wackiness that is encompassed in these mini games in unrivalled.

On the Wii I have been playing the best game of my life (my gaming history started with Sopwith and Frogger): Super Mario Galaxy. Please watch the trailer of this game:

Watching the video you will have noticed the complex manoeuvres that Mario does. He swims (on a turtle-jet of course), he walks on a ball, jumps of walls, rides a stingray, makes back flips, does double jumps, flies like a bee, etc. As a user you do all these moves with nothing more than the joystick and a single button. You don’t have to read a manual to start playing.

What design principles make this possible? In Mario Galaxy I noticed the following five:

It will not be easy to design all software according to these principles. A program like AutoCAD doesn’t have a quest or levels and is arguably much more complex than a Mario game. Even though it is hard, it is possible to radically change the interface of these programs and enable people to be productive without much training on how to use the program. Instead you could spend more time focusing on how to be creative with the software. Take a look at Google SketchUp as an example:

For learning events it is much easier to take these principles into account in your design. We are currently probably pretty good at progressive revelation, at repetition and maybe at building in obstacles. We do not focus enough on delivering just in time and on providing a safe environment for our learners.

Please be inspired by Nintendo!