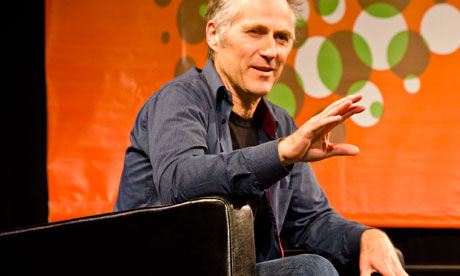 Tim O’Reilly was interviewed by Andrew McAfee (writer of Rage against the Machine). It is worthwile to fully quote the introduction to the session:

One of the great failures of any company – for that matter of a capitalist economy – is ecosystem failure. Great companies build great ecosystems, one in which value is created not just for a single company or group of industry players, but for partners who didn’t even exist when the product or service was introduced. Many companies start out creating huge value. Consider Microsoft, whose vision of a computer on every desk and in every home changed the world of computing forever, and created a rich ecosystem for developers. But as Microsoft’s growth stalled, they gradually consumed more and more of the opportunity for themselves, and innovators moved elsewhere, to the Internet. Internet innovators like Google, Amazon, Facebook, and Twitter have also created a rich ecosystem of opportunity, but like Microsoft before them, they are leaving less and less on the table for others. This is a bad trend. Wall Street firms, which got their start trading on behalf of clients, then began trading against them, then created vast Ponzi economies to drain the value from entire segments of the economy are even more dire examples of this trend. But this crisis of capitalism goes beyond individual industry segments. For example, the race by companies to eliminate labor costs has been a short term profit win but a long term loss. Since the cycle of capitalism depends on consumers as well as producers, and consumers are less and less able to find employment, at some point, we’re going to have to start thinking about how to put people to work, rather than how to put them out of work. At O’Reilly, we’ve always tried to live by the slogan “Create more value than you capture.” It’s a great way to build a sustainable business and a sustainable economy.

O’Reilly started off by talking about the banking industry which went from a value-creating industry to a value-destroying industry by wanting to keep more from themselves. He next switched to Microsoft which in its startup days managed to create a true platform on which others could create a massive amount of value. When Microsoft started to try and capture that value for themselves the value creators moved out and onto the web (O’Reilly’s was the first commercial site on the web). The definition of ultimate ecosystem failure is if you take more value out than you create. He says that we are effectively stealing from our grand children.

He observes that very often value creation starts by people having fun and then only later do entrepreneurs come along and start monetizing that value. An example is the make movement. We are only now (seven years into the maker fair) have people turning this movement into serious businesses. He really dislikes the current culture of startups raising money and then going for an exit (“despicable” is the word he used). A lot of these startups see money as gas and see what it is that they do as a journey from gas station to gas station, rather than as creating something that brings value to people. Finding your passion, getting people to believe in it and then try and make a difference is a more sustainable model. Great companies should have big and audacious goals.

The open source movement has had an immense positive impact on the technology ecosystem. These people very often did not make buckets of money, but they did create the infrastructure that all of us are building on top of now. He described to the clothes line paradox: when somebody decides to hang their clothes on the clothes line instead of using the dryer, we don’t just shift some energy use from hydrocarbons to renewables: it just disappears. This is a great metaphor for what is happening on the Internet with open source. MySQL for example “shrunk” the database market, but when you really look at it, it actually grew the market and created a lot of value.

How do you actually measure this type of value and the size of this (free unmeasurable) economy? That is hard. Investors don’t create jobs, customers create jobs. The only reason you need investors is because you cannot keep up with the demand of the customer. Tim O’Reilly is now looking for ways to put labour back into the economy. His first example is the Apple store. Most other retailers have laid off as much staff as possible. Apple has found a new model that works. Walgreens is now trying to do the same with healthcare. Other examples are Kickstarter and Etsy which both are putting labour back into the economy. He thinks we will be doing more of this “added value for eachother”. There is also a whole peer to peer thing happening. If you see a sharing economy it eventually does get monetized, so policy makers can start protecting the future from the past, rather than the past from the future.