Technology is never neutral. It is not just a tool. We know that technology has affordances and makes certain things harder and other things easier. As Benkler says “Technology creates feasibility spaces for social practice.”

One of the most fundamental thinkers on what media does to us was the “oracle from Toronto” Marshall McLuhan. He was a prominent figure in the sixties who was well known for his ability to speak in insightful but opaque “McLuhanisms”. Who hasn’t heard of “the medium is the message” or his predictions for “a global village”?

Let me whet your appetite with a few short video clips to give you a better idea of how he spoke and thought:

He defines technology as the extending our human body. This clip is from 1965:

Here he describes what he means with the medium is the message through talking about cars as a technology. The following clip is from 1974:

The talk about products becoming services feels pretty recent. McLuhan already talked about this in 1966 in this clip (and predicting how we would access information using networked computers):

If you want to see more, then check out all the videos uploaded by YouTube user McLuhanSpeaks.

Very few people nowadays have read his original works. His magnum opus is the Understanding Media (1964). Reviewers of the book at that time wrote things like:

Every so often, the semi-intellectual communities at the fringes of the arts, the universities and the communications industries are hit by a new book, which becomes a fad or a parlor game. This summer’s possible candidate, with what may be just the right combination of intelligence, arrogance and pseudo science, is Marshall McLuhan’s Understanding Media. (Time Magazine, 1964)

This is an infuriating book. It offers a number of brilliant insights but mixes them in with some extravagantly turgid incoherencies. Adopting a tone of Machiavellian candor and acquiescence, Dr. McLuhan loftily records the death of the “literally-logical” spirit in Western Man. This results, he says, from the impact of contemporary mass communications such as television and the jet plane. We are passing out of the age of rationalistic individualism and into an era of “tribal” togetherness and oral culture. [..] It was about time somebody took stock of the new social and intellectual situation caused by our advances in the techniques of mass education and mass hoax. McLuhan throws light on this situation by deliberately adopting a new “mosaic approach” which he assumes is called for by the novelty of the futuristic inferno we inhabit. But he seemingly cannot resist going over the deep end with his generalizations on such varied social phenomena as the motor car, baseball and Body Odor. His deep-end plunges, conveniently, happen to suit his over-all theoretical purpose, as in his terming B.O. “The unique signature and declaration of human individuality.” What he reads into the statements he attributes to varied authorities [..] is enough to make one’s old-fashioned “logical” flesh creep while his account of nationalism as, purely and simply, “an unforeseen consequence of typography” is grotesquely inadequate. (C.J. Fox for The Commonweal)

My favourite review comes from Arthur M. Schlesinger, Jr. who wrote in Book Week in 1967:

What then is McLuhanism? It is a chaotic combination of bland assertion, astute guesswork, fake analogy, dazzling insight, hopeless nonsense, shockmanship, showmanship, wisecracks, and oracular mystification, all mingling cockinly and indiscriminately in an endless and random dialogue. It also in my judgment, contains a deeply serious argument. After close study one comes away with the feeling that here is an intelligent man who, for reasons of his own, prefers to masquerade as a charlatan.

What would McLuhan say about the Internet/World Wide Web?

Next to getting a better understanding of his work, it is my purpose to think about what McLuhan would have said about the Internet and the World Wide Web. How can we apply McLuhan’s vocabulary (e.g. hot and cool medium, de- and retribalization, reversal, the electric age) to our current predicament? How can his thoughts inform us about the situation we are in? I am very curious to find out.

Reading and discussing in a weekly rhythm

I want to start a virtual reading group. We will read Understanding Media in 10 weeks (from March 18th till May 27th, less than 50 pages a week). Every week will have the same rhythm:

That is the minimum. Next to that I intend to organize things like a best quote of the week voting competition, screenings of McLuhan inspired films (in Amsterdam most likely), a set of resources (other primary literature on the topic, and secondary literature) and a set of guest lectures (also to be done on Mondays).

The kick off meeting will be on Monday, March 18th. You can always find the latest full planning here.

You can join too!

I would like to have as many people as possible join me on this reading journey. Joining is a simple four step process:

There will be a central space for this group: understandingmedia.net and I hope we can generate a big set of resources, thoughts and reflections aggregated through using the #umrg hash tag on places like Twitter, Delicious and Diigo.

Are you interested, but do you think you might be too busy? Register anyway! You are only committing to writing one summary, everything else can be skipped if you want or need to.

P.S. Most people wouldn’t think of starting a group like this without using Facebook. I don’t like Facebook so won’t use it. Others are of course free to do anything with this reading group on Facebook, I just won’t be joining you there. 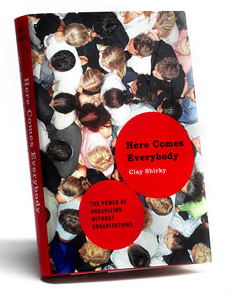