A few weeks ago I attended a workshop about LiquidFeedback organised by Netwerk Democratie and Waag Society. LiquidFeedback is a piece of open source (MIT-licensed) software that is used by the Pirate Party in Germany to help them in their decision making process. The tool aims to deliver the following:

In the Netherlands we live in a representative democracy founded on the principle of elected individuals representing the people. This has issues in the legitimacy of representation. A pure or direct democracy (in which all decisions are made by referendum) is more legitimate but is usually impractical at a large scale and has a danger of mob rule. Liquid democracy is an alternative (maybe a synthesis?) where you directly participate in issues if you have knowledge, are interested, are affected by it or if you think the issue is important. If you don’t have engagement with the issue, then you give the “power of attorney” (i.e. delegation) to somebody else on the basis of their expertise or your sympathy and trust for them. This delegation is transitive: your delegate can delegate his or her votes to the next person.

The LiquidFeedback software puts issues into areas, which themselves are clustered into units (e.g. the “parking permits” issue sits in the “transportation area” in the “Amsterdam” unit). 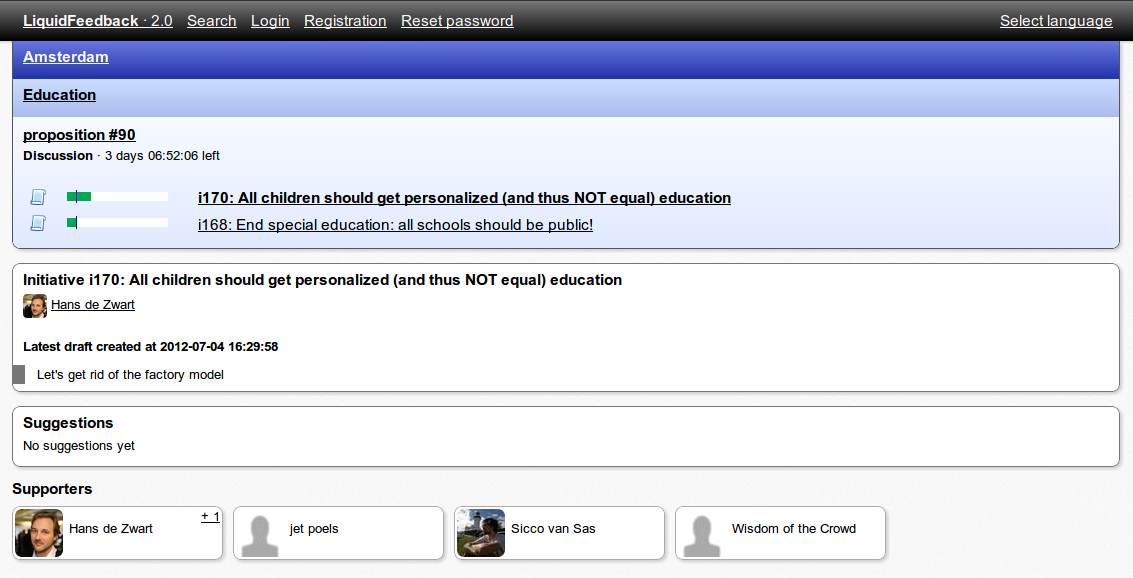 Unique in the software is that issues can be deliberated without moderation. The creators of the software had the following objectives in how issues should be discussed:

Their design criteria were as follows:

The whole process follows a simple model: First there is a discussion phase which consists of three parts: new, discussion, freeze. After that there is voting.

There is no anonymity in the system. Every member can start an issue. When they do, it is considered “new”. Everybody can then give constructive and quantifiable feedback. They can support the issue, or they can give a suggestion on how to improve the issue. Their suggestion is delivered as a “must”, “should”, “should not” or “must not”. Suggestions can get support too. The original initiatior has full discretion on if and how to amend the issue on the basis of the suggestions and is scored on how well the suggestions are incorporated (“yes” or “no”). Anybody can also post an alternative issue which can get support. If there is enough support (and a quorum is reached) then the issue turns into an initiative and can, after a frozen period, be voted on.

In the voting LiquidFeedback manages to solve a classic voting problem: sometimes similar initiatives can steal eachother’s votes (i.e. would Gore have lost the 2000 US elections if Ralph Nader would not have been in the race?). The presenters used the following example:

Imagine three plans for the redevelopment of a closed military plant and the number of votes they would get in a referendum:

In this case the plan for the chemical plant would win, even though there is a majority of people who would prefer a green option. This is problematic. LiquidFeedback solves this by using preferential voting. For each initiative you have following three options: approve with preference (you can prioritize each of the initiatives you aprove), abstain or disapprove with preference.

LiquidFeedback is not only used in politics, but has also been piloted in business. The CEO of the large german IT consultancy company Synaxon (who sympathises with the Pirate Party) has implemented the software in his company. He wanted to avoid the peer pressure that would naturally come within office politics, so Synaxon’s implementation is pseudonymous. The CEO as committed himself to act on any ideas that get enough support, even if he doesn’t like them. Here is a German article if you want to read a bit more.

I do realise that business isn’t a democracy (nor should it be), but I do see many domains inside business where it would be beneficial to have a much wider discussion and to get broad feedback on ideas. I would be very interested if anybody knows other companies experimenting with this type of information technology enabled deliberation.

P.S. LiquidFeedback isn’t the only tool for this purpose. An alternative is Adhocracy.