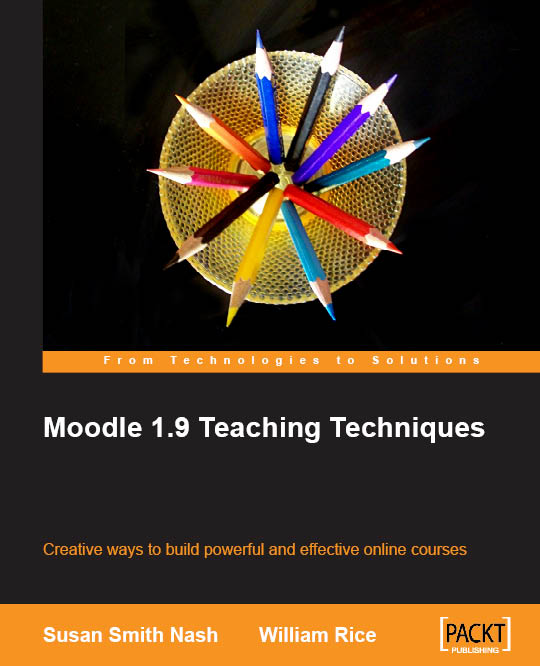 Just over a year ago I reviewed four Moodle books published by Packt Publishing. Since then, a lot of new Moodle titles have been added to their catalogue. Richard Dias, Marketing Research Executive at Packt, has kindly sent me a copy of one of these new titles for review: Moodle 1.9 Teaching Techniques by William Rice and Susan Smith Nash, first published in January 2010.

William Rice has already published a couple of books with Packt. This book seems to be an effort by Susan Smith Nash to  build on an earlier version of the book by Rice. She adds some learning theory and instructional design essentials to the earlier text.

The fact that this is an update of a much older book, doesn’t work very well. Let me share some examples of where it goes wrong:

The book doesn’t really make optimal use of the new and advanced functionality that Moodle 1.9 has on offer. Two examples:

Does the book have some valuable things to offer? It is not all bad:

All in all I would not recommend anybody to get this book. If you have 30 euros to spend on a Moodle book (this book isn’t cheap!) choose one of the ones I recommend here. If you have a basic understanding of Moodle and are looking for generalised teaching techniques for online courses you are much better served by Gilly Salmon‘s work on e-moderation (see E-moderating and E-tivities).