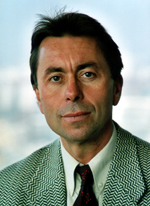 I am the Online Educa with Stoas for a commercial purpose: we have a stand with four European Moodle partners and are trying to talk to as many people as possible about Moodle

This means that I have not had the opportunity to really go to any of the sessions. I did manage to go to the keynotes of the first day though, so I would like to write down some of the things that I have noticed there.

Just like Wilfred Rubens I had really looked forward to hear Michael Wesch speak. I should have known that I would have been disappointed. This had nothing to do with Wesch, who is an insightful and entertaining speaker, but with the fact that I already know what he does. He focused on the lowest common denominator in the audience and that wasn’t me.

I guess you could say that he suffered from the exact problem that he is trying to solve in his educational practice: how do you stay significant when you stand in front of an audience in a design built for non-participation. The title of his talk “The Crisis of Significance and the Future of Education” is highly relevant. I thought it was unfortunate that he only focused on the first part of his title and did not talk about recent educational projects like his World Simulation Project.

One slight disappointment was followed by a very pleasant surprise. The Berlin based media scholar Norbert Bolz gave a slide-less talk titled “From Knowledge Management to Identity Management”. This talk was highly conceptual and sociological (if not philosophical).

He talked about five Internet related phenomena and what kind of effects these are having on society:

All of these are topics which invite more exploration. I am looking forward to doing that over the next couple of weeks and will start with Granovetter’s essay.

Tomorrow is another day. I am hoping to see another keynote session and go to the Battle of the Bloggers (with Jay Cross, Wilfred Rubens and Stephen Warburton; looking forward to the strong language!).