The 2008 Online Educa in Berlin was the first time I saw Fronter‘s appropriation of the term “open source” for their own marketing gain (they are not the only company looking for some open source street cred). At that time I wrote an irate blog post that got a bit of attention, but never a reply from Fronter itself.

It wasn’t surprising to see that Fronter did not change its ways for this year’s Online Educa. I wrote the following tweet: 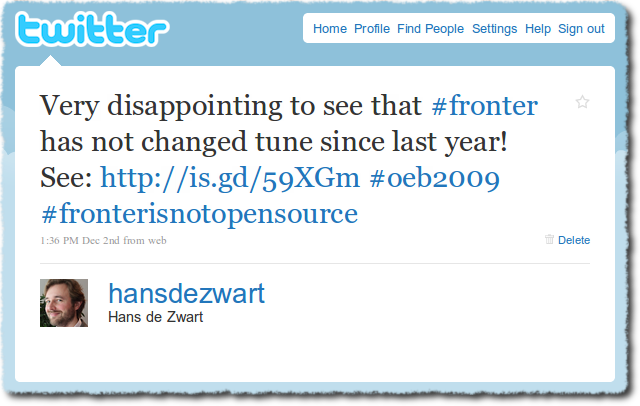 My slightly provocative attitude had its effect and Fronter’s CEO Roger Larsen send me an email asking to meet with him. We had a quick chat at the Fronter stand.

He asked me what it was that I didn’t like. I explained that I don’t mind a proprietary business model for software (you can sell the software you create in any way you see fit), but that I have a problem with his misleading language in his marketing materials.

According to him it has never been his intention to mislead his customers. He is not sure of what he has done wrong as he has used the term “open source” for his software in his marketing materials for over ten years now. It has only been in the last three years that the open source movement has hijacked the term open source and given it a specific meaning.

I then told him that the Open Source Initiative (OSI) started in 1998 and that the first version of the GNU General Public License (GPL) came out in 1989. I pointed out the parts of their brochure that I thought were misleading and offered him my help in ensuring that the next iteration of the brochure would not make incorrect use of the term open source. He gracefully accepted that offer.

I leave it up to the reader to judge whether his innocence is genuine. I myself will judge that at next year’s Online Educa.