Dean Kamen, founder of DEKA Research and Development and inventor of the Segway, iBot, an insulin pump and a portable dialysis machine, started by thanking the IEEE as the place in the background that makes sure that things keep on working and told us that ADD is one of his greatest assets.

He talked about three of his projects: 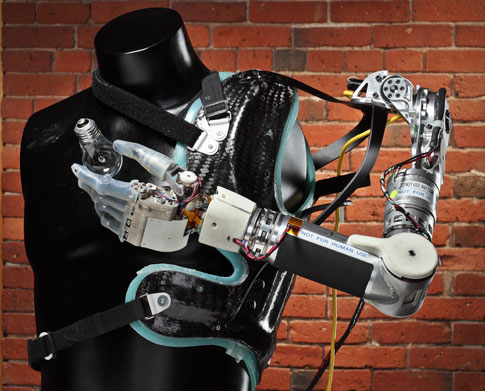 He was approached by DARPA who told him that weapons have developed a lot in the last 150 years, but that prosthetics has bare ly developed at all. They challenged Kamen to make a 9 pounds prosthetic arm in two years that would allow somebody to pick up a grape and a raisin from the table and eat it. He thought the assignment was impossible and didn’t really want to take it on. At night he couldn’t sleep and kept rolling around his bed. He then thought: how do you roll around if you don’t have arms, so he decided to take it on. After about 15 months of development tey had their first generation prototype which could be used by somebody to pick up the grape after about 10 hours of training. The second generation of the arm will come out soon.

These are two of the world’s greatest problems. 1.1 billion people in the world lack access to safe drinking water. If we could give clean water, then 50% of all disease in the world go away. 1.6 billion people lack access to electricity. Without access to electricity it is hard to participate in the global modern economy. We are using a 19th century centralized model to distribute water and electricity. We now have different models for distribution. An example is the way that cell phones have taken off from the bottom up.

Water is tough: you need too much infrastructure to get the right amount of filters, chemicals and other solutions to clean the water. Kamen’s idea was to make a box with two hoses. One hose you put in any type of water and out of the other hose come water that is crystal clear and meets all standards for water quality. The box should be small enough to move around and should be able to support one hundred people. Distillation is a process that could work, but that normally takes too much energy. They found a process (a vapour compression distiller) that could re-use a lot of the energy to boil the water. The box needed a little bit of electricity which could be a problem. So they needed another box that could generate electricity: the stirling engine. They trialled these technologies in Bangladesh and in Honduras. The technology is now there, so he needs help to find a way to distribute this globally and get it in every little village. The one product that has a truly global distribution system is Coca Cola (they have over 300.000 in Africa for example). So he is now partenering with them to develop a next generation fountain. He is now challenging coca cola to become the world’s largest healthcare provider.

For Inspiration and Recognition of Science and Technology (FIRST) is his project to fix a cultural problem in which we don’t celebrate the things that matter. We are obsessed with sports and entertainment. So he has created a sports inspired set of competitions around science and technology: