Today I attended a virtual TED session at Kennisnet in Zoetermeer. Kennisnet has a TED Live membership and hosted a few guests on their verdieping. I watched two sessions of about six talks each streamed straight from Edinburgh. Below my semi-live blog with the things that triggered me.

Chris Anderson kicked of this session on radical transparency (one of my favourite topics) by saying that transparency is a great driver of moral progress, but that it is also easy to get carried away by it. This session thus also presented some of the darker sides of openness.

Malte Spitz has a lot of courage: he has a significant stutter, but was still on stage talking about the power of mobile phones. He talked about the EU data detention directive which tells providers that they have to store the data of their customers for months on end. There have been a lot of protests against this. Spitz asked his telecome provider Deutsche Telecom multiple times to give him all the data that they stored about him. They wouldn’t send him the information, so he took them to court. The court case was settled and Deutsche Telecom gave him 35830 lines of information (basically six months of his life) on a CD. He decided to make this information public to show people what data retention truly means. He visualised it in a scary way: 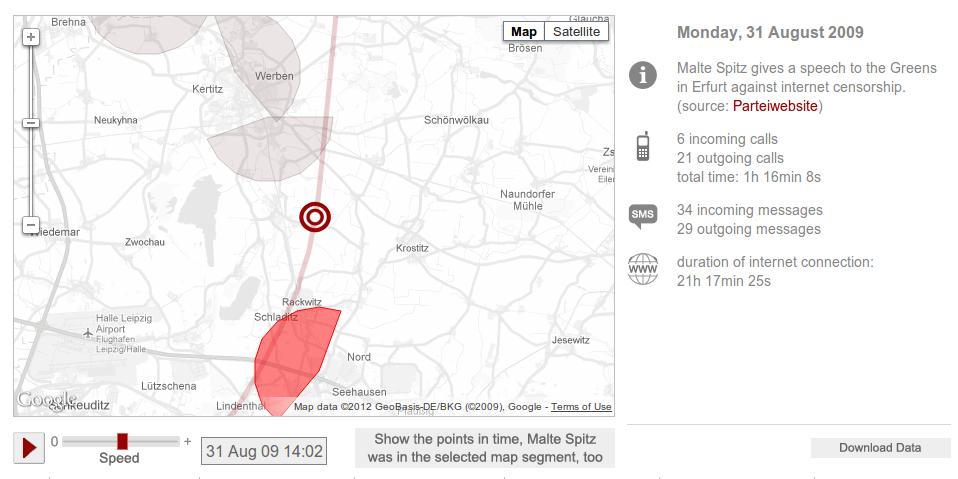 This shows that if you have access to this information you can control your society. He considers it a blueprint for countries like Iran and the future of a surveillance society. States love this type of information. Privacy is not an outdated concept and should continue to be a value in this 21s century. Spitz says we have to contineously remind ourselves and our friends to fight for our self-determination in this digital age.

Spitze’s talk reminded me that I still have not published the results of my Privacy Inzage Machine exercise that did a few months back. I should really make an effort to get this online.

Ivan Krastev is a political theorist from Bulgaria talking about the crisis of democracy. He wants to question the popular belief that transparency and openness will fix our democratic problems. He questioned the optimism of the “Church of TED” and contrasted it with “the most pessimistic country in the world”: Bulgaria. He wants to know how come we live in societies that are much free-er than before while at the same time having lost our faith in the democratic institutions and trust in politics. One issue he sees is the huge increase of unequality in our societies.

With a transparent government we might get into a situation where we have a “reverse 1984”: all of us monitoring the politicians. What would that mean? When we put all our politicians under the microscope will consistency become more important than common sense? Politics is about people changing their views. Will that become harder? We should also remember that any unveilling is also a veilling: there will always be things that people will hold back. Maybe the best way to shut people up is to publish everything they say on the Internet.

Gerard Senehi is an experimental mentalist. He performed a few relatively lame illusions around telekinesis and mind-reading. I guess this was the entertainment part of this session.

Gabriella Coleman is a digital anthropologist. She has been studying Anonymous for the last three years doing “ethnographic diplomacy”. According to her it is very hard to answer the simple question: Who/what is anonymous? One of their more famous campaigns was Operation Payback, but they also consist of smaller groups like LulzSec and Antisec. In general she would describe anonymous as irreverent. Slowly the movement has become more politicised which probably started with their “ultra-coordinated motherfuckery” around Scientology.

Anonymous scales and is participatory; it is not simply hackers. To become anonymous you only have to self-identify as being anonymous. Anonymous may seem chaotic, but most targets are not random. They put on a good performance, obvious even to their detractors. They are a formidable PR machine that becomes a PR nightmare for others. Their political art is that of the spectacle. They dramatize the importance of anonimity and pricavy in an era when both are rapidly eroding. There visible and invisible.

What is their future? They’ve been plagued with government crackdowns and brand fatigue, but she believes that there will continue to be a group of people who care to protect the Internet and who might fight back when some forces and institutions are trying to erode the power of the net. As an aside: Wired has just published a good article on Anonymous too.

Walid al-Saqaf a journalist and TED fellow has developed a program called Alkasir that is designed to map and circumvent censorship in countries that censor the Internet. He shared some stats from the usage of his program: around 90% is Facebook usage.

Leslie T. Chang is a journalist who has spend a great deal of time talking to the people who make the things we use everyday: the factory workers making our running shoes or our phones. She says that our usual narrative equating Western greed to Chinese suffering is way too simple. Chinese workers are not forced into factories because of our insatiable demand for iPads, they migrate away from the countryside towards the big cities looking for a larger life. We shouldn’t think that we can know what the individuals making up what we see as the labouring masses are really thinking. Very few of them want to go back to the way things used to be.

I thought Chang’s talk itself mainly showed her prejudices going into this assignment: of course each of these factory workers has their individual life consisting of dreams and ambitions. Why wouldn’t they have? And yes, of course there is upwards mobility. But is that really the most interesting thing you can say about globalisation after spending two years talking to these people?

Neil Harbisson cannot see color (he is totally color blind, everything he sees is grey). He wears a device he calls the eyeborg allowing him to hear color. He created an electronic eye in 2003 that transforms light frequencies into tones allowing him to hear those tones using bone conduction. After wearing it for a while it became a true extension of his brain. Life has changed a lot for him now that he sees color. Visiting a supermarket is like going to a nightclub. He now dresses in a way that “sounds good”. During the talk he was dressed in “C-major” and he goes to funerals dressed in “B-minor”. He can use food to create melodies so that he can “eat songs”. When he meets people he likes to create sound portraits of them, finding for example eyes that sound similar. An interesting secondary effect is that normal sounds started to sound like colors. So he has created paintings from songs or from speeches. He can differentiate 360 colors (all degrees from the colour wheel), but he can also hear infrared and ultraviolet which are frequencies that normal people can’t see. He has started the cyborg foundation trying to encourage people to extend their senses through devices like eyeborgs, noseborgs, earborgs and fingerborgs.

Wonderful talk! I would love to make “extending your sensory perception” an informal research theme going forward. It reminded me of the Wired story about the haptic compass. Is there anybody who is willing to lend me some extra-sensory perception gear? Maybe something to be made in the Amsterdam Hackerspace Technologia Incognita? Here is an interesting blog belonging to the Extra Senses, Extra Interference research group at the Interfaculty ArtScience in The Hague.

Sarah Caddick introduced the topic of the talks in this session: they all relate to the brain in some way.

Read Montague is a reformed computational neuroscientist. He talked about what we can now do with fMRI technology. It has allowed us to study human beings to isolate mental functions. His research uses economic games (like the ultimatum game) and measures the cognitive apparatus that people use when they play these games. He has created technology to synchronize multiple fMRI machines and link them together on the net. For the first time we can now measure interacting brains simultaneously.

Elyn Saks is an academic with chronic schizophrenia. She described a psychotic episode she had years ago. She had delusions, hallucinations and weird/loose associations and was hospitalized in a psychiatric institution where she was restrained for many hours on end on many days. She wrote a paper about physical restraints and now is pro-psychiatry and anti-force. She also described how she tried to get off medication and what negative effects this had. Why is she able to address us like this today:

But even though she has these three things, the stigma against mental illness is still so strong that it took her a long time before she was willing to talk about her schizophrenia in public. She asks us to stop criminalizing mental ilness (with the LA County Jail being the US’ largest mental institution) and to know that there aren’t schizophrenics, instead there are people with schizophrenia.

Ruby Wax started by thanking the creators of the chemicals that allow her to function. Without them she doubts she would have been able to conquer her depression. She had a terrible bout of depression and was institutionalized with the “other inmates”. She got very little support from the outside world, just a few calls telling her to “perk up”. How come we don’t get sympathy when our brains aren’t working properly? According to her there is a mismatch between how we are hardwired biologically and what modern life is throwing at us. This is why our pets are happier than us. She started a project/website titled Black Dog Tribe with the motto: Mental illness does not discriminate, it does stigmatise.

Vikram Patel talked about a life expectancy gap between people with a mental ilness and people without one: in developed countries this is 20 years, in developing countries this is worse. Many people all over the world don’t get the treatment they need. There isn’t enough mental health professionals in the developing world. He found books on task-shifting in health (like this one) and on the basis of that created the concept of SUNDAR:

With SUNDAR ordinary people are taught how to deliver health and psychiatric services. To help this end forward he started a movement for global mental health.

Wayne McGregor talked a bit about the body as a very literate entity and proprioception. He then live-choreographed a piece of dance inspired by the T from the TED logo and had two dancer interpret his movement into movement themselves. Fascinating to see a choreochrapher in action, I can’t remember seeing that before.