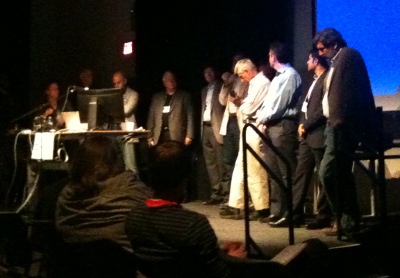 The Scientists on Stage

These next few days I am attending Emerge 2012 conference in Phoenix, Arizona. The subtitle of this conference is “Artists + Scientist Redesign the Future”. The conference is a mix of talks, workshops and a media festival. The basic idea is that current science can inform us about what might happen in the future. Artistic exploration of those futures (i.e. science fiction) can than pull these futures forward and in turn inform science.

I will try and semi-live blog as much of this event as possible. Reflection will have to wait for later. Apologies for typos: I have a new laptop with a new keyboard that I still have to get used to.

Portraits of science and technology

The day kicked off with a group of scientists giving small portraits of the current cutting edge of their work:

What is interesting – Lee Hartwell

Hartwell really wants to understand where “interest” comes from. This is a research project that he is embarking on. He is hoping that he will find some answers to his question at this conference.

Some Thoughts on the Future of Healthcare – Neal Woodbury

Woodbury is from the Biodesign Institute from Arizona State University. How do you make medicine a much more sustainable practice? How do get useful medical technologies that are very inexpensive and look at medicine from an angle of keeping people healthy, rather than treating late stage disease? One example of this type of technology is the “Comprehensive Immunosignature Detection Array Platform: you take some blood and put it on a set of peptides and the outcome gives your insight in your current immune system. People with different diseases get very different immune system signatures/profiles. To enable this there are looking at possibilities for “painless blood draw”. His open question is how to you translate this type of technologies into useful practice at scale. What is the medical system of the future that will actually be able to utilize this type of information? When you have comprehensive health monitoring, you really have to change what diagnosis is for example.

Rittman is focused on Environmental Biotechnology. The challenge they are addressing is that we need to replace most fossil fuels with renewable substitutes. We need to do this to slow down (and hopefully reverse) the atmospheric build up of CO2. He showed us a diagram of how renewable bioenergy might work in a carbon neutral loop where CO2 just goes through the circular process. They use a bacterium called “Synechocystis” which is capable of converting solar energy with CO2 into a fuel that can be used. They are tuning the genes of this bacterium to make it work even better, so that can turn these organisms into factories for producing energy based materials we might need. Another example are “Microbial Electrochemical Cells” in which they use bio-organisms on the anode of a fuel cell. The advantage of this is that they can create organic fuels.

Helms-Tillery showed us a lot of different projects, most of them focusing on the hand and creating prosthetic devices for the hand. The hand is an interesting object for study: a complicated mechanical device that is essential for nearly everything that we do. It has twenty joints in in and all the “movers” are in the arm. Picking up something like a bottle is not a trivial thing from a biomechanical perspective. The hand doesn’t operate by itself, so it is important to look at the arm too (e.g. for reach). They are also looking at using your brain to control these external interfaces. Hands are also sensory organs and prosthetic hands should have similar sensory ability, so they are building sensorized skins. Current experiments with children who are in hospital to be treated for epilepsy show that it is very feasible to let them control something on the screen with their brain.

Be All You Can Be and Then Some: Military Human Enhancement – Dan Sarewitz and Brad Allenby

Sarewitz’ question is: where will the “next people” be come from. We are all currently much more enhanced than we were in the past (think doping in sports, kids taking Ritalin, vaccines, artificial knees or Google). This is all pedestrian though, the really enhanced people are in the military right now. So tomorrow’s humans will emerge from the Pentagon. What kind of things are happening there now: weapons, body armor, exo-skeletons.

According to Allenby is the problem that the human bandwidth is now the weakest link in systems necessary for operations in complex environments. They are working on building cognitive networks that include many individual human brains with systems of consciousness emerging as a property of this. They might even drive human beings out of the decision loop, because they might not be necessary anymore and might just be too slow. They will design human varietals: “we will never be human again”, get over it.

Janssen is interested in using information technology (and social networks) to empower citizens to act. How can we stimulate people to contribute to the public good? A few examples: In San Marcos they gave a few hundred households energy bills that showed how their energy use related to that of their neighbours. By combining this with simple smilies they actually managed to get people to use less energy overall. Another example is the use of towels in hotels: they experimented with it and found out that people cooperate if others do too. There are examples of this everywhere, like in Bali where people have shared irrigation for many years. The tragedy of the commons is not necessarily true anymore: Elinor Ostrom has developed a framework that shows how high level of cooperation is possible, but mainly in small homogenous communities. Cities are different: they are very heterogeneous and lack feedback on your behaviour. They think they can use computing to create these small homogenous communities in large cities. What is people are willing to be monitored in exchange for a reward? This is what some car insurance companies are already doing. The promise of technology lies in its ability to connect the large scale to the everyday.

Gaming the Future, With Impact – Sasha Barab and Alan Gershenfeld

Acccording to Gershenfeld, the game industry understands motivation and has pushed this forward as artistic artform. They keep people exactly on the edge of their capabilities and through challenges induce continued engagement with the game. Just because this medium has this potential doesn’t mean that is used for good. The current state of game-based learning is that the level of promise is very high, but that the scale of impact is relatively low: there is a big gap. Closing this gap is still a relatively young science and the Center for Games and Impact are working on creating a framework for actually building games that deliver impact and they have managed to rise the sector and get involvement from a lot of partners that are willing to fund the work and are interested in seeing what it can do for their problems.

Barab, a learning scientist, showed some of the initiatives that the center is doing are understanding, engineering and scaling for impact. Things like: games for transformational play, games as design fictions. He believes that video games of entire worlds in which learners are central, important and active participants. They are a place where the actions one takes have an impact on that gaming world and a place in which what you know is directly related to what you are able to do and who you become.

Enhancement, engagement and empowerment are the three themes that Turaga has heard about today. He talks about sensor networks that can actually empower change in behaviour. Sensing modalities are all over the place: these can mined for patterns. He showed an example of how their system could learn the rules of Blackjack by observing the interactions between people playing the game. How do we do this at scale? Using for example livelogged data to create adaptive representations which can then be used to make us better.

Spanias talked about sensor networks in our homes. He showed an example of moving from single microphones to microphone arrays that with proper algorithms can localize sound, cancel noise, do acoustic scene analysis and even solve the cocktail effect. They can use this to record and then create a spatial sound experience or do acoustic scene characterisation.