Arjen Vrielink and I write a monthly series titled: Parallax. We both agree on a title for the post and on some other arbitrary restrictions to induce our creative process. Some people would consider Facebook a threat to the open Internet (e.g. Tim Berners-Lee), whereas other people see it as a key tool for promoting democracy in this world (e.g. Wael Ghonim). We decided to each argue both sides of the argument (300 words “for” and 300 words “against”) and then poll our readers to see which argument they find more persuasive. You can read Arjen’s post with the same title here. 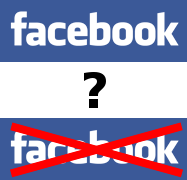 For a couple of months now my pragmatic side has been battling with my principled conscience. The matter of contention: whether to keep my Facebook account.

Anyway, for me it is clear: I don’t want to be a part of Facebook’s success and would prefer it if we all would be using a differently architected solution in the near future. Fully decentralized and distributed systems are in the making everywhere (e.g. Diaspora, Pagekite, StatusNet, Unhosted and Buddycloud) and I will invest some time to explore those further. As I also personally get very little value out of Facebook, it is not hard to act principled in this case: I will be deleting my account.