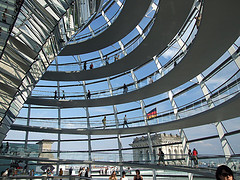 This evening I had the chance to go to the Reichstag in Berlin. This incredible building currently houses the German parliament (the Bundestag).

Admission to the magnificent dome is free. The last people are allowed in at 22:00 and are then allowed to stay till midnight. I hope our Dutch public institutions will take the Reichstag as an example.

The view of Berlin at night was impressive. Walking up the spiral (which is separate from the downward one) make you see the full panorama about three times.

The dome was designed by Norman Foster and built to symbolise the reunification of Germany. When you look down towards the inside you can see the seats of the parliament which get direct sunlight reflected through the mirrored cone in the centre of the dome.

Looking at that mirrored cone I suddenly realised Foster’s brilliance: the cone not only allows sunlight in, it also must allow the people sitting in the parliament seats to oversee all of Berlin when they look up. To me this makes the dome a wonderful physical realisation of a metaphor for not performing omphaloskepsis, but instead looking outward to the world at large.