Arjen Vrielink and I write a monthly series titled: Parallax. We both agree on a title for the post and on some other arbitrary restrictions to induce our creative process. For this post we agreed to write about the 6 books that had the most influence on who we are today. For each book we include a first read section. You can read Arjen’s post with the same title here.

Writing about books that you like is one thing, writing about books that supposedly have changed your life is another. The influence of books on one’s life is very indirect. Books might change your beliefs, they can change your disposition, they might even influence your decisions and change the path of your life course. I found it hard to pinpoint books that really did any of this for me. However, I did try. In chronological order of when I first read them:

The Blind Watchmaker – Richard Dawkins
Although this is not my favourite Dawkins book (that would be The Selfish Gene), it is the one that got me started on his writing and has instilled in me a love for popular science. This was the first time I read a science book that was written with such clarity and eloquence. Evolution theory is incredibly compelling, as it is capable of answering many questions about who we are today and why we are like this. Dawkins showed me the value of a good metaphor (“the blind watchmaker” is one of them). Many of his metaphors have stayed with me for years. His books are an excellent introduction into the scientific method: nobody is better at explaining how progress is achieved in the scientific enterprise. After reading this book I went on to read Dennett, Hofstadter, Pinker and others. Their books satisfy my personal curiousity, helping me understand how humans work in this world. I still read every book that he publishes, but get increasingly irritated by the presence of his arrogant personality in his writing.
First read: 1993

History of Western Philosophy – Bertrand Russell
This book is one of the reasons why I studied philosophy (an inspiring teacher being the other).  The full title of the book is History of Western Philosophy: and its Connection with Political and Social Circumstances from the Earliest Times to the Present Day. Russell manages to not only give a relatively objective and complete overview of western philosophy, he also infuses the book with historical anecdotes and his personal opinion. This is a big book (800+ pages) and the scope is immense. It is not just philosophy, it is also a history of the ancient Greeks, Christianity and the enlightenment. Here is his definition of philosophy from the introduction:

Philosophy, as I shall understand the word, is something intermediate between theology and science. Like theology, it consists of speculations on matters as to which definite knowledge has, so far, been unascertainable; but like science, it appeals to human reason rather than to authority, whether that of tradition or revelation.

What a brilliant writer and thinker! By the way, in the “atheist manifesto” category, I far prefer Russel’s Why I am Not a Christian over Dawkin’s The God Delusion.
First read: 1994

Catch-22 – Joseph Heller
No other book has shown the absurdity of war better than Catch-22. I couldn’t stop reading when I first read this and it is one of the only books that I have read twice. I barely ever remember the names and personalities of characters in novels, but Yossarian and Milo Minderbinder (“Everybody has a share”)  are still clear in my mind. As a critique of bureaucracy, Catch-22 is even more compelling than Kafka’s The Trial. Here is the explanation of the title:

There was only one catch and that was Catch-22, which specified that a concern for one’s safety in the face of dangers that were real and immediate was the process of a rational mind. ‘Orr’ was crazy and could be grounded. All he had to do was ask; and as soon as he did, he would no longer be crazy and would have to fly more missions. Orr would be crazy to fly more missions and sane if he didn’t, but if he was sane he had to fly them. If he flew them he was crazy and didn’t have to; but if he didn’t want to he was sane and had to.

This is probably the funniest book I have ever read, I can’t wait to read it again..
First read: 1994

If This Is a Man/The Truce

If This is A Man/The Truce – Primo Levi
If I was allowed to set the curriculum for all schools in this world and could only put one book on it, this would be it. Levi was an Italian chemist who got deported to Auschwitz and lived to tell the tale. For the rest of his life he struggled with his fate and self-perceived guilt (survival was only possible if you inhibited the gray area of collaboration in the camps). If This is A Man was written right after the war and describes his time in Auschwithz. The Truce is a book about his months long travel home after liberation. Both these books show humanity in its most naked form. I read these books in complete shock. They give an insight into the darker side of the human psyche, while at the same time proving that human dignity can prevail in the harshest of circumstances. This is as close to understanding the human condition as you can get.
First read: 1995 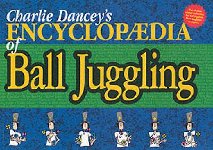 Charlie Dancey’s Encyclopædia of Ball Juggling – Charlie Dancey
I taught myself how to juggle one holiday in Prague. I believe juggling is a very healthy activity. The symmetry of the movement and the required concentration provide for a liberating workout (see The Zen of Juggling and Lessons from the Art of Juggling). Charlie Dancey’s book brought my juggling to the next level. Dancey is an excellent writer, illustrator and juggler. His goal was to provide an encyclopædic overview of all ball juggling tricks. The form of the book is very suitable for jugglers: it is wide enough to stay open by itself. Not only did this book teach me a lot of new tricks (e.g. Mill’s mess, blind juggling, the box, orangutan, juggling with children, eating the apple, etc.), it also gave me a firm understanding of the mathematical underpinnings of juggling (e.g. measuring difficulty, siteswap and ladder notation) and it served as an introduction into the juggling community. I still cannot juggle five balls, but have recently picked up the book again and am sure I will eventually get there with Dancey’s humourus advice!
First read: 1996

Le Ton Beau de Marot: In Praise of the Music of Language – Douglas Hofstadter
This book is unlike any other. Hofstadter set out to write a book that could convey his passion for language. While writing the book his wife died of cancer. Parts of the book were turned into an eulogy for his wife, giving the book an emotional depth that it would not have had before. This book had to compete with Metamagical Themas to be included on this list. Metamagical Themas is collection of incredibly diverse essays, including my favourite essay about the nuclear arms race. Le Ton Beau de Marot wins out, because of the unity of its message: language is fascinating and translation is not just about function, but also about form. The core of the book is 72 different translations of a poem by Marot from French into English. Hofstadter comments on each of these and encapsulates them in an exploration of literary language. On the journey we encounter an immense amount of word-play, Eugene Onegin, machine translation and much more. He vigorously argues for giving due attention to the non-semantic aspects of the written word. This is masterful book in both its form and function (or medium and message if you will).
First read: 1998