One format at SxSW is called “Future15”. These are five solo presentations of 15 minutes each. I attended one of these sessions.

Jeff Gothelf is a lean UX advocate with a book that will hit the stores soon. He describes what the design process looks like for people outside of the profession: basically it looks like a mystery. He is convinced that designers actually feel this mystery as empowering and giving them control. Jeff thinks the mystery isolates the designers from the non-designers. It creates artificial silos which quickly degenerates into an us and them situation. There is no shared language or common understanding. This means that a project manager is usually the person in the middle. This will get you to the end-state, but it will be lacklustre. He says that transparency is the key component to making the best products, mainly because the efficacy of collaboration is directly related to team cohesion. The onus is on the designers to demystify the way that they work. If they do this, the “fingerprints” of the customer and the other team members will show up in the work. This doesn’t make everybody a designer, it actually make the role of the designer more valuable. One thing that bothers designers with this way of working is that it “shows your gut” and that might be very tough to do.

There a few simple things that designers can do to help this process along:

The Art of the No-Decision Decision

Peter Sheahan is a founder of Change|Labs and has all the mannerisms of a bullshit artist. He talked about decision makingHe drew a simple framework that showed that people make decisions on the basis of their identity or the consequences. These he calls “decisions”. Habits and structural things also make us make decisions. He calls this “no-decision decisions”. He gives an example of a Japanese toilet that measure people’s blood sugar levels and contacts a doctor when the levels are not what they need to be: a no-decision decision. I guess his main point was that we need to remove the user from the experience and design technology and the environment in a way to get behaviour you want. There are four things we can do to help people make no-decision decisions: 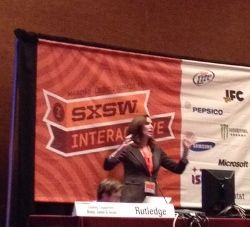 Pamela Rutledge is a psychologist. She talked a little bit about the different systems in our brain and the ages of those (the reptile brain, the emotional brain and the new brain, you know the drill). The only way to really engage the “new brain” is through turning the experience into a story. She then went on to talk about “flow” the optimal balance between anxiety and boredom and challenge and skill. The easiest way to get the brain into a flow state is by using story. The story is the real secret weapon to get the brain engaged, this is becayse they are both instinctual and abstract and can speak to all parts of the brain. She finished off with saying the following: “You design for people. So the psychology matters.”

Why Mobile Apps Must Die

Scott Jenson from Frog Design made a humble proposal: mobile apps must die. The usual reaction from people is to ask him what he is smoking. He doesn’t mean to say that native UX isn’t currently better than web UX. What he does mean is that only focusing on native UX we have stopped thinking about things and our design future. To him we are currently on a local optimum. He sees three trends:

These three trends all work against the native apps paradigm. He sees a lot of “just-in-time” interaction with the web. Installing an app is too much work for these type of interactions. It is hard to change away from the “app” paradigm. Scott showed us an alternative: Active RFID, GPS, Bluetooth and Wifi are four technologies that can help us show us what is around us. They cn show us what is nearby without us having to discover it. Companies that can deliver on this promise might become the next Google. This will be hard to do: we don’t yet have the just-in-time ecosystem where we have phones asking “what’s here” and other objects going “I’m here”. If we don’t start thinking about these things now, then we won’t have them tomorrow.

Eric Gelinas works at Flickr. They are using geolocated photos to make the photos more discoverable and easier to navigate. Location very often helps to contextualize a photo. To make this easier they created a 3-step zoom. The default is zoomed out, when you hover over the maps you are zoomed into the city and then when you hover over the point on the map you are fully zoomed in. A lot of map interfaces have traditionally be very awkward: not dynamic, information overload. A lot of websites are switching away from Google Maps now and move towards OpenStreetMap data often in combination with MapBox (e.g. Foursquare, it allowed them to put much more design into the maps and escape the licensing costs from Google). There is a campaign to help others switch over to OpenStreetMap: Switch2OSM. Eric wrote a lot of code for Flickr to make their maps. Right he might have used something like Mapstraction. Another great library is Leaflet.

In Flickr you can put in your geo-preferences which allow you to hide your detailed location for particular locations. Merlin Mann wrote the following tweet about that technology:
<phttps://twitter.com/#!/hotdogsladies/status/108613619989757952