Arjen Vrielink and I write a monthly series titled: Parallax. We both agree on a title for the post and on some other arbitrary restrictions to induce our creative process. For this post we agreed to write about the influence of a workspace on performance. The discussion should build on the ideas set forth in a previous parallax post Planning your Career or the Boundary between Private and Professional life. You can read Arjen’s post with the same title here.

I have written before about the direct influence of our environment on our behaviour. I think learning professionals can learn a lot from people like Hans Monderman. This traffic engineer looked with a fresh eye at how people and technology relate to each other. This led to some ground-breaking traffic concepts (quote from Wikipedia):

His most famous design approach is Shared Space, also known as designing for negotiation or Shared Streets. Monderman found that the traffic efficiency and safety of urban streets improved when the street and surrounding public space was redesigned to encourage each person to negotiate their movement directly with others. Shared Space designs typically call for removing regulatory traffic control features (such as kerbs, lane markings, signs and lights) and replacing intersections with roundabouts. 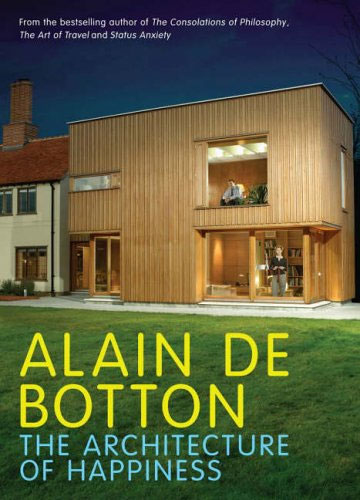 The Architecture of Happiness

Our surroundings change who we are. I was therefore delighted to learn that Alain de Botton has written a book about exactly this topic, applying it to the architectural domain: The Architecture of Happiness. In it he writes about one of my favourite architectural topics: Le Corbusier and his plans for the Radiant City:

By building upwards, two problems would be resolved at a stroke: overcrowding and urban sprawl. With room enough for everyone in towers, there would be no need for cities to spread outwards and devour the countryside in the process. ‘We must eliminate the suburbs,’ recommend Le Corbusier, whose objection was as much based on his hatred of what he took to be the narrow mental outlook of suburbanites as on the aesthetics of their picket-fenced villas. In the new kind of city, the pleasures of the town would be available to all. Despite a population density of 1,000 per hectare, everyone would be comfortably housed. Even the concierge would have his own study, added Le Corbusier.

There would be ample green space as well, as up to 50 per cent of urban land would be devoted to parks – for, as the architect put it, ‘the sports ground must be at the door of the house.’ What was more, the new city would not merely have parks; it would itself be a vast park, with large towers dotted among the trees. On the roofs of the apartment blocks, there would be games of tennis, and sunbathing on the shores of the artificial beaches.

Simultaneously, Le Corbusier planned to abolish the city street: ‘Our streets no longer work. Streets are an obsolete notion. There ought not to be such things as streets; we have to create something that will replace them.’ He witheringly pointed out that the design of Paris’s street plan dated from the middle of the sixteenth century, when ‘the only wheeled traffic consisted of two vehicles, the Queen’s coach and that of the Princess Diane.’ He resented the fact that the legitimate demands of both cars and people were constantly and needlessly compromised, and he therefore recommended that the two henceforth be separated. In the new city, people would have footpaths all to themselves, winding through woods and forests (‘No pedestrian will ever meet an automobile, ever!’), while cars would enjoy massive and dedicated motorways, with smooth, curving interchanges, thus guaranteeing that no driver would ever have to slow down for the sake of a pedestrian. [..]

The division of cars and people was but one element in Le Corbusier’s plan for a thoroughgoing reorganisation of the life in the new city. All functions would now be untangled. There would no longer be factories, for example, in the middle of residential areas, thus no more forging of iron while children were trying to sleep nearby.

This rational (at first sight) design for cities has an intuitive appeal. It is therefore not surprising that many municipalities have created whole neighbourhoods according to Le Corbusier’s principles. I have worked in one of these neighbourhoods for many years: the Bijlmer. The Bijlmer can be considered an urban design failure. Its giant apartment flats have mostly been demolished or rebuilt within the first 30 years of their existence.

Urban planners could (should?) have known better. Jane Jacobs wrote The Death and Life of Great American Cities in 1961, delivering a damning critique of Le Corbusier’s idea of separating the different functions of a city. De Botton writes it down very elegantly too (apologies for another long quote, I think they are worthwhile though!):

Ironically, what Le Corbusier’s dreams helped to generate were the dystopian housing estates that now ring historic Paris, the waste lands from which tourist avert their eyes in confused horror and disbelief on their way into the city. To take an overland train to the most violent and degraded of these places is to realise all that Le Corbusier forgot about architecture and, in a wider sense, about human nature.

For example, he forgot how tricky it is when just a few of one’s 2,699 neighbours decide to throw a party or buy a handgun. He forgot how drab reinforced concrete can seem under a grey sky. He forgot how awkward it is when someone lights a fire in the lift and home is on the fourty-fourth floor. He forgot, too, that while there is much to have about slums, one things we don’t mind about them is their street plan. We appreciate buildings which form continuous lines around us and make us feel as safe in the open air as we do in a room. There is something enervating about a landscape neither predominantly free of buildings nor tightly compacted, but littered with towers distributed without respect for edges or lines, a landscape which denies us the true pleasures of both nature and urbanisation. And because such an environment is uncomfortable, there is always a greater risk that people will respond abusively to it, that they will come to the ragged patches of earth between their towers and urinate on tyres, burn cars, inject drugs – and express all the darkest sides of their nature against which the scenery can mount no protest.

In his haste to distinguish cars from pedestrians, Le Corbusier also lost sight of the curious codependence of these two apparently antithetical forces. He forgot that without pedestrians to slow them down, cars are apt to go too fast and kill their drivers, and that without the eyes of cars on them, pedestrians can feel vulnerable and isolated. We admire New York precisely because the traffic and crowds have been coerced into a difficult but fruitful alliance.

A city laid out on apparently rational grounds, where different specialised facilities (the houses, the shopping centre, the library) are separated from one another across a vast terrain connected by motorways, deprives its inhabitants of the pleasure of incidental discoveries and presupposes that we march from place to place with a sense of unflagging purpose. But whereas we may leave the house with the ostensible object of consulting a book in a library, we may nevertheless be delighted on the way by the sight of the fishmonger laying out his startled, bug-eyed catch on sheets of ice, by workmen, hoisting patterned sofas into apartment blocks, by leaves opening their tender green palms to the spring sunshine, or by a girl with chestnut hair and glasses reading a book at the bus stop.

The addition of shops and offices adds a degree of excitement to otherwise inert, dormitory areas. Contact, even of the most casual kind, with commercial enterprises gives us a transfusion of an energy we are not always capable of producing ourselves. Waking up isolated and confused at three in the morning, we can look out of the window and draw solace from the blinking neon signs in a storefront across the road, advertising bottled beer or twenty-four-hour pizza and, in their peculiar way, evoking a comforting human presence through the paranoid early hours.

All of this, Le Corbusier forgot – as architects often will.

This is a very long pre-amble to the topic at hand: how the workspace can affect performance. 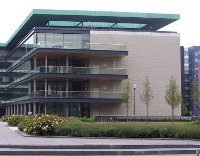 Most of my time I work in an office in Rijswijk that has been designed by David Leon. The longer I work there, the more impressed I have become by the attention to detail of its indoor design. The designers obviously have a very deep understanding of how people work nowadays and have created a work environment that enables people to get the best out of their day. How is this done?

There are many similarities with the post I wrote about planning your career. Many of the things that keep you in the “Hooray!” zone on a career (macro level) are also relevant on the micro level when it comes to doing day-to-day work. Transparency, flexibility, the opportunities for networking and the use of technology are what make my office great. 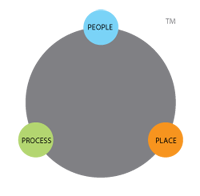 My company seems to understand this too. There is a reason why they hired David Leon, who write on their website:

Innovation depends on bright people. These people cost more and are far more valuable than the buildings they occupy… but it is a proven fact that the environment in which they work has a major impact on their effectiveness.

For that reason we design workplaces and buildings round the needs of people and the business aims of their organisations.

It is therefore stupefying that I am forced to use a locked down version of Microsoft Windows 2000 with Internet Explorer 6 as a primary workspace every single day of my working life (currently all employees are migrating to a locked down version MS Vista, this should be finished by the end of the first quarter). I think this is a big mistake and know that many people are not as productive as they could have been because of this.

I estimate that I am about 50% more productive on a laptop that is exactly configured to my specifications. The ability to use the applications that I want on the operating system that I prefer (that would be Ubuntu) would make a huge difference. It is the small details that make all the difference. I can’t use my normal keyboard shortcuts, I don’t have access to the command line to do things in batch, I don’t have a decent browser, I cannot edit images; I could go on much longer.

Many of the sites I need to look at don’t even work on IE6 anymore. The other day I browsed to drop.io from work and got the following message: 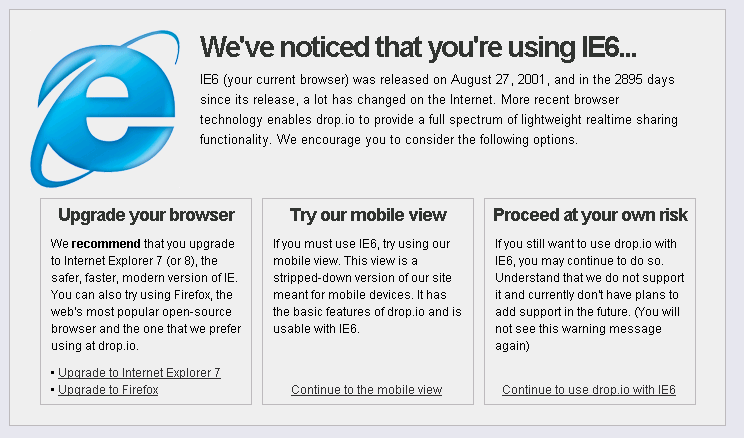 So, here is my recommendation to all companies:

Yes, this means that you cannot standardise on hardware and software.

Yes, this means you have to allow access to your network from the device that your employee chooses.

Yes, this means you will have to support open standards so that people with a Mac or running Linux can access your applications.

Yes, you will have extra costs because of all this.

But these extra costs will easily be offset by the extra productivity that your employees can deliver for you. In a couple of years it might actually become difficult to find employees that want to work for your company if you don’t heed to this recommendation.

Is your productivity affected by your workspace? Does your company allow you to choose your hardware? Can you install the software that you want and/or need? I look forward to any comments.