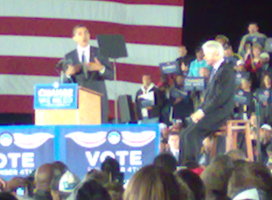 Obama and Clinton in Florida

The day before yesterday I had the extraordinary privilege to see and hear an ex-president and the next president of the United States speak at an rally in Kissimmee, Florida.

We were taken to the venue by a Haitian cab driver, who not only is the best domino player of the US (by his own estimation), but also kindly let us listen to some of the Republican radio stations. He loves listening to those stations because of their extreme and ridiculous viewpoints.

We arrived at a big sports field around 17:30 where a very orderly line had already formed. During the wait we could buy all kinds of Obama buttons and T-shirts (my favourite: a Matrix spoof with Obama as “The One” and Biden, Michelle and Powell in the background). There was a heart warming amount of optimism and camaraderie in the line. The doors opened at 20:30 and we were quickly searched at a security checkpoint. Multiple helicopters circled the air, another security measure.

The field slowly filled up with everybody walking to the catheter. When we reached, we were pleasantly surprised to be only about 20 yards away from the speakers. At 22:00 congresswoman Brown, the senator of Florida and Jimmy Smith urged everybody to vote early. A lawyer ensured us that this time the Democratic party has five thousand lawyers in Florida alone, making sure that every vote counts and suing as soon as problems emerge. “They won’t steal the election this time.”

Right on time (23:00) president Clinton and senator Obama appeared. Clinton spoke first with Obama sitting next to him on a stool and smiling. Clinton said that there were four reasons why Obama is the president that the country needs:

According to Clinton both candidates had to make two presidential decisions during this campaign. The first is the choice of a vice president (no need to dwell on this point), the second was acting on the economic crisis. Clinton explained that Obama has had a lot of criticism for taking a while to respond, but that during that time Obama was calling his economic advisers, Clinton’s advisers, Warren buffet and other specialists realising that this was a complex situation that needed to be understood well. This is exactly what a president does according to Clinton.

Next it was Obama’s turn. He looked relaxed and spoke with an incredible clarity and purpose (without using a tele-prompter). The presence of the hugely popular Clinton gave Obama the opportunity to refer to those prosperous Clinton years in which the average yearly income rose by 7500 dollars as opposed to the Bush administration where the average income fell with 2000 dollars.

What struck me was the honesty of what he said and his willingness to also talk about the difficult issues. The US needs to tighten its belt. He will have to go through the budget “line by line” and scrap the things that we might like, but do not need. He spoke about investing 15 billion dollars in green technology and creating 5 million green jobs. He addressed the accusation of being a communist (“Yes, I shared my peanut butter sandwich in school, I am a redistributionist”). He praised McCain for his stand against torture but also pointed out the fact that McCain’s voting record has been with Bush on all economic matters. “Bush has been digging a hole for eight years and McCain is ready to take over the shovel.”

Finally he urged everybody to not think that the race has run. Everybody has to go out and vote.

It was an amazing experience being at a historic event like this.

Only a couple more days…